It has certainly been a whirlwind couple of weeks in the Primary School, with plenty of activity and excitement, as the year draws to a close.

The Junior Primary were excited to present the musical Lights, Camel, Action 2! – The Sequin, in Week 8, after many months of rehearsals during their Performing Arts classes.

The musical was a sequel to 2019’s performance, set in the middle of a talent show where the star-studded cast of nativity celebrities put on a spectacular show to celebrate the birth of Jesus and retell the Christmas story.

The Year 1 students danced and hustled in their Roman costumes, along with the marching centurions, while the Year 1s appeared as shepherds and angels, delighting the audience with their dance moves. The Receptions had a chance to shine, as ballet dancing stars, and jigging shepherds, before the all-in finale of Oh What a Glorious Night.

It was wonderful to have parents and friends able to attend the matinée and evening performances, with many more watching online.

The Year 3, 4 and 5 students had their opportunity to take the stage this week, and they presented items themed “Finding Hope”.

Each year level presented an amazingly choreographed performance, as they reflected on what finding hope, in any circumstance, looks like. The Year 3’s colourful rendition of Image of God showed that each person is uniquely made by God with a special purpose. The audience couldn’t help but Smile, during the Year 4’s performance of the same name! Combining drama and dance, the item was a reminder to remember, and be thankful for, God’s many blessings. The final performance, by the Year 5s, featured spectacular synchronised movement and actions, to the song Help Is On The Way, as an encouragement to look to God for help.

Held as a separate event, the Year 6 Graduation was a special time for families as they watched their children finish their time in Primary School, and prepare for the step into Middle School.

The evening began with a dynamic performance by the Year 6 dance elective students, with breathtaking choreography to the song For God is With Us. Filled with flips, lifts, jumps and lights, the students highlighted that the reason for our hope is Jesus.

The Year 6s, who had celebrated together at their luncheon a week earlier, were presented with their Principal’s Gold Medallion by Mr Thomson. Following reflections from the Year 6 teachers and prefects, the celebrations concluded with a colourful bang at the end of the evening.

We would like to thank all those who worked hard to ensure these events were a success, particularly Mrs Amy Webster for her amazing work with both the Junior and Upper Primary throughout Term 4. Thanks also goes to Mrs Laura Carson, who choreographed the Year 6 performance, to all of the Primary School teachers, and to the team who worked to bring the sound, lights, media and livestream together for each performance.

Thank you also to our parents and families for your understanding and patience regarding the attendance limitations. It was a joy to have you attend and celebrate these events with us this year. 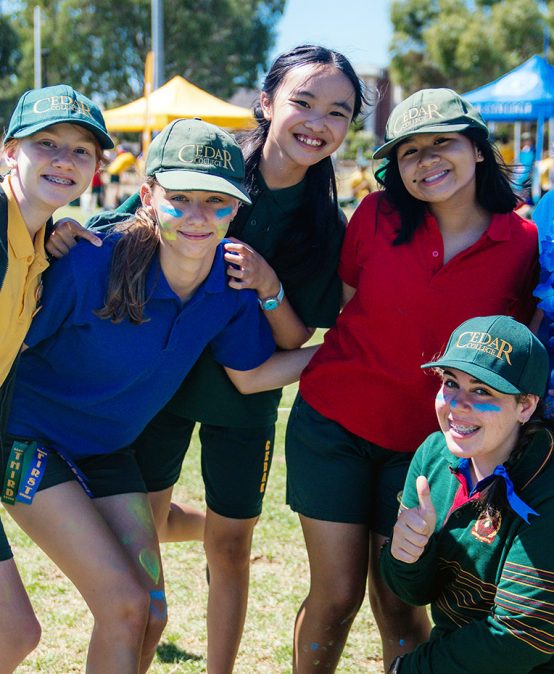